Warning: Includes sad and ugly images.  Native wildlife on Tamborine Mountain is not only under pressure from development. A significant risk to survival of our native wildlife is feral and domestic animals.

The EPA have captured photographs and our members often see dogs and cats in native mountain bushland. We cannot be sure if they are domestic or wild but the fact that many wildlife victims were not eaten, indicates that they could be domestic dogs allowed to run wild. Please to be very attentive to your dogs as lack of supervision can be very deadly to the native wildlife.

The increase in cats, dogs and foxes is playing havoc with our native wildlife and is leading to risks of local extinctions. Pademelons,reptilers and other mountain wallabies are being killed regularly by these predators. Some of the rock wallabies around the escarpment have not appeared to raise young for years as, while these predators cannot always catch and kill the mature adults, the females, burdened with a large joey are forced to cast them to escape. The gene pools may be shrinking beyond the point of recovery with only small groups of increasingly older adults left. This risk of extinction on the plateau is serious and the escarpment is rapidly heading in the same direction.

"Dingos, wild dogs and dingo hybrids are abundant and widespread throughout the Scenic Rim Region. The impact of wild dog activity has increased in the past 10 years due mainly to the increasing population in the region."

"Wild dogs include dingoes, feral dogs and their hybrids. Uncontrolled domestic dogs that  irresponsible owners allow to roam free also act like  wild dogs. In settled areas, all these dogs put added  pressure on wildlife populations that are already  suffering from the loss of habitat. As there is easy  access to food in these areas, scavenging enables  dog populations to be maintained at higher than  natural levels, increasing pressure on wildlife and  domestic stock."

Domestic dogs and cats present a real threat to our native wildlife and this is not the pets' fault!

Locally we choose to live close to or adjoining native bushland. This places a greater resonsibility to protect the bushland and its wildlife from our actions or inaction that causes significant harm.

For cats, a good guide from Melbourne Pet Minders:

"While the desire to hunt is not as strong in some breeds of cats (such as the Persian), almost all cats have an instinct to hunt and kill wildlife - even well fed domestic pets. Studies have estimated that the average pet cat kills at least 25 native animals every year. Wildlife that are not killed immediately by an attack almost certainly die within 36 hours from shock or infection from bacteria in cats’ mouths. Cats also carry Toxoplasmosis, a disease that can spread to entire populations of native animals, with devastating effects."

Most wildlife killed by roaming pet cats is often caught just outside the back door. Remember that confining cats at night isn’t enough! Wrens, finches, honeyeaters, frogs and skinks including the Blue-tongue Skink are all active during daylight hours and fall prey to domestic cats that are not confined.

There are also laws that can be applied to enforce that protection. State law requires property owners to manage certain specified feral animals.

For Pets, SRRC requires owners by law to keep their pets enclosed on their property.

In extreme circumstances, wildlife protection laws might by applied by Queensland and Commonwealth Government bodies.

Some may say more enforcement is required but we like to think educationg the community about the issue will also encourage more self-compliance along with a genuine desire to protect the environment and keep pets safe too.

What you can do

All traps have the potential to cause injury and some degree of suffering and distress so should only be used when no practical alternative exists. Traps that contain an animal (e.g. cage or box traps) cause fewer injuries than traps that restrain an animal (e.g. leg-hold traps). Animals caught in a cage trap are not likely to experience significant injuries unless they make frantic attempts to escape. Traps on the other hand can cause serious injuries to both target and non-target animals such as swelling and lacerations to the foot from pressure of the trap jaws and dislocation of a limb if the animal struggles to escape. Treadle snares are also an alternative but they are difficult to set and need to be checked at regular intervals (at least every 4-8 hours) to prevent severe tissue damage and fractures. As well as injuries, trapped animals can suffer from exposure, thirst, starvation, shock, capture myopathy and predation; therefore traps must be placed in a suitable area protected from extremes of weather and inspected at least once daily.

Shooting can be a humane method of destroying feral animals when it is carried out by experienced, skilled and responsible shooters; the animal can be clearly seen and is within range; and the correct firearm, ammunition and shot placement is used.

However, it may be considered an inappropriate method for wide scale effective usage in a urban-rural environment like Tamborine Mountain.

National Parks and Local Government in the past carried out two or three 1080 baiting programmes a year. Whilst controversial, it was effective allowed recovery in these native wildlife. Other means of control such as trapping and shooting are labour and skill intensive, dangerous and nowhere near as effective as baiting for the resources avaiable for such programs. Irresponsible pet owners that do not keep their pets under constraint so as to prevent them from exercising their natural desires to hunt and kill are also responsible for government departments being unwilling to 1080 bait for wild feral predators. This is because of the likelihood of killing these owners' pets, incurring their wrath and, in this litigious age, finding themselves on the losing end of a damaging lawsuit. This is a lose/lose for our native wildlife and is increasing their rate of extinction.

"Baiting with 1080 in or near rural subdivisions is difficult, resource-intensive and sometimes not permitted when the requirements of the ‘1080 guide’ cannot be fulfilled due to population density. Baits should not be laid within 2 km of a dwelling without either the permission of the owner or approval of a Biosecurity Officer. In some areas, this means that a landholder must obtain hundreds of written permissions in order to bait. The current alternatives to 1080 baiting (such as intensive trapping and employment of trappers by local government) may be moreexpensive and labour-intensive"

This is an understandable requirement from the LPOs because Health Dept. guidelines. But in the Tamborine Mt. escarpment which is our main habitat area there is very little that is 2 kilometre from a dwelling and the most significant habitat areas are within 2 kilometre of thousands of dwellings even though they are in steep and relatively inaccessible terrain. A local Feral and Domestic Animal Management Group (FADAM) found it impossible to conduct any baiting programmes under these rules.

"Because of the proximity to residential areas we are unable to use 1080 in the national park area around Tamborine Mountain and in my view, this has contributed to increased numbers of wild dogs."

New South Wales Parks Management appear to have have a more engaging approach based on 2011 practices noted here:

As well as unmanaged pets, with feral predators increasing and moving closer to suburbia, the lack of effective management is a death sentence for our native ground dwellers. We either need significant resources applied to alternative management techniques or we need to consider some relaxation of these health regulations if we are serious about controlling these predators.

The followiging images were taken within a few days in bushland off the northern end of Beacon Road. 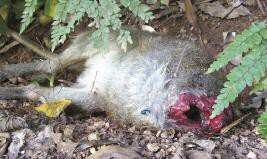 Left: A young pademelon with his head ripped off.

Below: A mature swamp wallaby killed – nothing left but the legs.

Right: An echidna, still alive but with many puncture marks